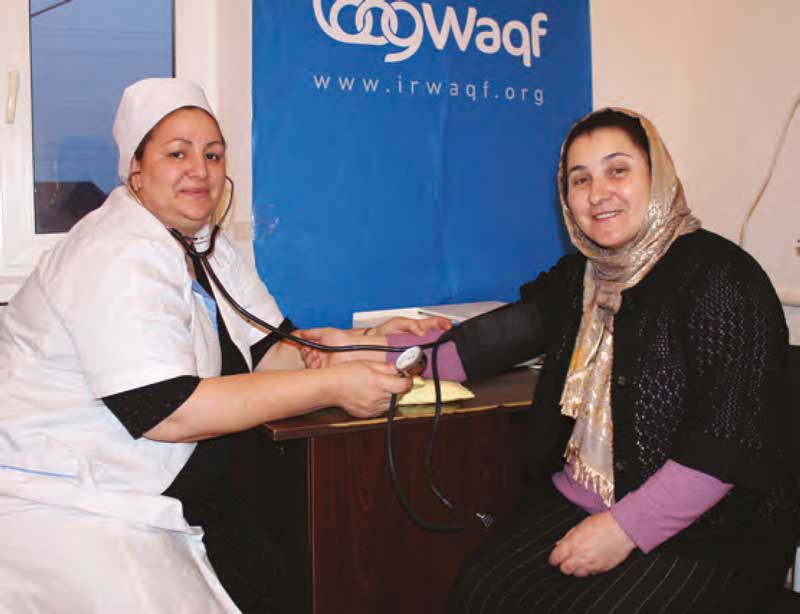 During the Chechen war, the health care sector fell apart. Countless hospitals were destroyed or heavily damaged, and those that remained became overcrowded, straining the already limited facilities and staff. Many hospitals were abandoned in their inoperative state, leaving countless people without access to much-needed health care.

Like many other areas, Karpinka’s first-aid station was destroyed in the conflict, causing the Chechen Health Ministry to request the help of Islamic Relief. With no local access to healthcare, residents had to travel 7km to the nearest hospital, whether for a minor or a major injury. This caused an overload of patients at the hospital, straining the staff and facilities, and thus reducing the quality of medical care that the patients received. Islamic Relief Waqf rehabilitated the medical point by repairing all of the wall and floors and supplying it with equipment for ultrasounds and electrocardiography. The first-aid station now has a medical bed and table, special lamps to kill bacteria, and a dry-air sterilizer. The burden on the local hospital has now reduced considerably and residents can save the money they had to spend on traveling to the hospital.

The project has also employed local, well-trained medical staff who have benefitted from the new jobs and improved working conditions.

During the war, Petimat and her family fled to Ingushetia, a republic neighboring Chechnya. Despite fleeing for their lives, they were faced with more sorrow when Petimat’s husband was diagnosed with cancer and died in 1999. Her world was thrown upside down, but with three sons to look after who were just eight, five, and one year old at the time, she had to find the strength to carry on.

“I’ve realized how helpless I am, but I should go on as I have three sons who need my support.”

In 2012, her mother-in-law tragically died from high blood pressure whilst waiting for an ambulance from the hospital.

On a separate occasion, Petimat’s son, Adam, came home with unbearable stomach pains. It later turned out that Adam was suffering from a peptic ulcer (open stomach sores) and had to endure a very painful hour and a half bus journey to the hospital.

Petimat and her family are delighted that the medical point has now been rehabilitated and access to health care is now available on their doorstep.

“Who knows, maybe my mother-in-law, the grandmother of my children whom they loved so much, would be alive if there had been a functional medical point nearby.”