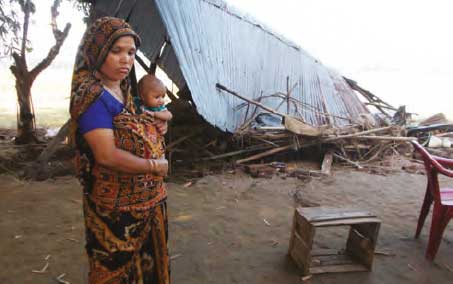 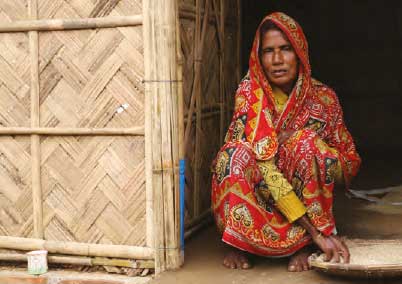 “Thank you. Now I can live the rest of my life peacefully. May Allah bless you.”

The houses were made by local masons and carpenters, providing employment for 20 people.

In 2014, over 300,000 people were affected by the heavy rains and flooding in Assam. Tens of thousands of shelters collapsed and busy roads became relief camps, filled with rows and rows of emergency tents.

In an attempt to seek immediate shelter, temporary huts were made out of any left-over material that could be found. Months later, people are still residing in these unstable and unsafe shelters. The people of Assam received compensation money from the Government, but at just 2,300 rupees per person (approximately 23 GBP), it simply wasn’t enough to help them back
on their feet.

Moreover, the area is extremely vulnerable to flash flooding which temporary shelters are unable able to support. If flooding occurs again in the future, the damage and destruction will be even greater.

In 2015, Islamic Relief Waqf rebuilt 46 damaged houses. Built with flood-resistant materials and raised off of the ground, the houses will be much better equipped to withstand future episodes of flooding.

Local communities were also trained on disaster and risk prevention activities – such as first aid and search and rescue training.

Tusto Bano, 61, lives with her son and five grandchildren. Her husband died five years ago from a long-standing illness.

“We are poor but Allah has always given us enough to meet our daily needs. But since the floods, our lives have completely changed. Now, we are burdened with loans,” said Tusto.

After the floods, many turned to loans to pay for food, water and shelter; everything that was washed away. Now, on top of all of their other troubles, they have to find ways to repay the loan providers.

When Tusto’s hut was destroyed in the floods, the community helped her to rebuild it, but it was only a temporary solution. Made from bamboo, it was not stable enough to withstand any future disasters.

Now, Tusto has her own strong and secure house. No longer will she need to worry about whether her house and possessions will survive the next rainstorm.

“Thank you. Now I can live the rest of my life peacefully. May Allah bless you.”