“I and the one who takes the responsibility of an orphan will be in Paradise like this.”  (and joined his middle and forefinger together).

Conflicts, natural disasters, poverty and illnesses around the world have been some of the situations where children have sadly lost their parent/s. These children are often left to fend for themselves and struggle to get through life with the same opportunities as other children.

Becoming an orphan sometimes means a child is left to look after their own siblings (if they have any). In some cases, they are forced to leave school, just so they can work to provide an income to survive on. Parents offer protection and guidance, however, when that parent figure is no longer around, children often feel lost, scared and a don’t have a sense of belonging. This can cause many issues for the child growing up.

As the Messenger of Allah (peace be upon him) strongly advised, we must step in to take care of those who have no one to look out for them.

“The best house among the Muslims is a house in which there is an orphan who is treated well.” [The Messenger of Allah (peace be upon him), Ibn Majah]

The conflict in Gaza has placed a heavy burden on children and young people. Over 8,000 orphaned children are living in dire conditions across the West Bank and Gaza. Many have no financial support and are unable to access adequate support. Their futures therefore look bleak.

Whilst many families have fled the Gaza Strip seeking refuge abroad, some children are left behind after losing their family to the conflict. With almost 30% of people across the Palestinian Territories living in poverty and an unemployment rate of 54% – the highest in the world – orphaned children living with or without carers often struggle to build sustainable, secure futures for themselves. 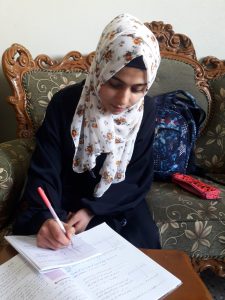 Seraj is an ambitious young girl who dreams of pursuing a career in dentistry when she’s older. Her family describe her as a cheerful, charismatic and positive person. When she was only six, her father was involved in a serious accident that left him paralysed and bed-bound for the next seven years, he sadly passed away in 2018. This has seriously affected Seraj, she told us:

“My father was sick for as long as I could remember, but that did not make his death any easier”

Seraj lives with her mother and two older siblings. Her family lack a stable source of income and usually rely on charitable assistance. Therefore, this sponsorship will serve as a main source of income for her family, helping them to sustain themselves. Seraj aspires to become a dentist with the hopes of helping others. She is grateful for the support, she told us:

“Your sponsorship makes a difference and I hope that you will keep on supporting. I hope to complete my education and find a job, and then I will support the needy orphans as you do. May Allah reward you for all your good deeds.”

Sadly, at the beginning of 2018, Yousef lost his father to a longstanding illness. This was a very traumatic experience for the whole family. Shortly after his father’s passing, Yousef was involved in a tragic accident and ended up in hospital. Yousef spent several days in the intensive care unit and underwent eight rounds of plastic surgery on his hands to repair the damage caused by the burns. Following the operations, he is now able to better use his hands. 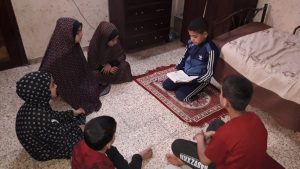 Yousef family lack a stable financial income. Therefore, the regular sponsorship provided by International Waqf Fund from 2019 offers a main source of income for the family and helps to meet Yousef’s needs. As a result, Yousef can now enjoy a better standard of life.

“Your sponsorship provides us hope and support to face life’s difficulties. Really, no words are enough to thank the charitable people who give from their own money to help the needs of orphan. We always pray to Allah for your blessings and best reward.”

When you donate an Orphan Sponsorship Waqf share you are investing in a child’s future and your own. We transfer all the donations we receive into low-risk Sharia-compliant investments. Once these accrue profits we use part of these profits towards bettering the lives of orphans through sponsorships. Some profits are also reinvested back into our fund so they can generate more income for years to come. With this project, you can build on your sadaqah jariyah whilst also transforming the lives of many thousands of children.

The cost of one sponsor and orphan sponsorship Waqf share is only £7,200. This could be split between you and any family members or friends so you could all reap the benefits in the hereafter inshallah.

Donate today and help us answer their prayers.